It is hard to not be awed by the scale and tremendous care that goes into supporting the gigantic system bringing water to New York City and the surrounding counties. Flowing from the Catskill/Delaware Watersheds and the Croton Watershed, approximately one billion gallons of water are consumed in New York City every day, serving 8.5 million residents as well as millions of tourists each year. In all, the New York City Water Supply System provides nearly half the population of New York State with high-quality drinking water.

It is humbling to realize just how dependent all these millions of people are on the water supply functioning the way it is supposed to. Water constitutes about 50-70% of our bodies as human beings. Water from the reservoirs, aqueducts, and street-side sampling stations is quality tested by the Department of Environmental Protection’s scientists, with nearly 630,000 analyses performed on the samples in four state-of-the art laboratories (NYC DEP).

In my own tradition of Franciscan Catholicism, we are called to protect water as a component of creation care, protecting the Earth and our bodies as temples of God. Saint Francis of Assisi heard a call from God to “repair my house, which…is falling utterly into ruin.” While initially he took this as a call to repair a physical church, he eventually came to understand it as a call to repair the institutional Church and the universal house of God, the common home that we all share here on Earth. His spirituality grew to such depths that he came to regard Earth as Mother Earth, and water as Sister Water. By protecting water, we are protecting our health and that of our fellow sisters and brothers with whom we share the Earth. Unfortunately, in many places in the United States and across the world, oil spills from pipelines, contamination from hydraulic fracturing, and runoff from nuclear power plants and industrial agriculture threaten water supplies. Thus, I see the call to watershed discipleship as extremely important for people of faith.

Pope Francis explained the risks of water pollution in his 2015 encyclical, Laudato Si’, which many people of faith are using to make the case for why we should care for our common home. He dedicates a whole section of the encyclical to the issue of water – noting the importance of fresh water for healthcare, agriculture and industry; the prevalence of droughts and water poverty; the outbreak of water-related diseases among the poor; water pollution resulting from certain mining, farming and industrial activities; the phenomenon of water privatization by large multinational businesses; and the link between water scarcity and the cost of food and various products which depend on its use. He also notes, “access to safe drinkable water is a basic and universal human right.”

Yet, my concern about water quality and safety stems not just from the threats modern society and corporate greed pose to water safety. I am also concerned because water is the healthiest drink. I work at Bronx Health REACH, which partners with school districts and a number of faith-based and community organizations to promote water as the best alternative to beverages of poor nutritional quality. In this work, it is necessary to make sure we can point to sources of safe drinking water if we want people to switch away from unhealthy drinks like sodas and drinks high in sugar.

First, I’ll share a little bit about why we are advocating for people to drink more water, and then share about other environmental and health concerns related to our water system. Finally, I’ll mention the work of a number of faith-based and community organizations in and around New York City that work to ensure there is safe drinking water, and that people are accessing it in healthy amounts.

Soda, sports drinks, fruit-flavored drinks, and other sugar-sweetened beverages may sound appealing and some drinks (such as sweetened teas) sometimes get marketed as “natural” and healthy. Society is swamped with marketing campaigns that make these consumer products sound appealing thanks to billion-dollar advertising budgets, but these products are contributing to high rates of diabetes, obesity, and other chronic diseases, with higher and higher rates of these diseases showing up in young children. In turn, this causes rising healthcare costs for dealing with these diseases.

In the Bronx, a third of adults consume at least one sugar-sweetened beverage per day, and over half of children do. A third of Bronx children are overweight or obese, as are two thirds of adults (NYC DOHMH).

Not only do sugar-sweetened beverages contribute to the desecration of our own bodies, but often the industrial processes used to create unhealthy beverages also place undue harm on the environment and make public water sources less and less accessible to the people who need them most. None of this is healthy for people or the economy, but these practices line the pockets of corporate executives. By infusing a sense of value on drinking water, Bronx Health REACH is working to ensure the continued safety of our water supplies.

In addition to drinking water directly, water is also used to grow food for our local food system. Some of us in the watershed are teaching children about growing food and getting local food into schools, restaurants, and churches. There is even a farm run by Catholic sisters who sell the produce to local parishes for use in farm shares, food pantries and soup kitchens. Bronx Health REACH has been instrumental in developing a “Bronx Salad” that encourages consumption of culturally relevant foods while also encouraging community members to grow some of the produce locally, such as in community gardens. A feature of this salad is the dressing made from the Bronx Hot Sauce, which is made by a local chef with peppers grown in the Bronx. A version of this salad is becoming increasingly available in NYC school cafeterias, thanks to a partnership between school gardening and Farm to School efforts in NYC. As we seek to develop a regional food system and reduce the environmental impact of our food system, we must also seek to protect the water supplies that nourish the crops.

While the water delivered to NYC is pristine and high quality, many New Yorkers remain skeptical of its safety. Therefore, I recently took a tour of the watershed that supplies water to NYC to learn just how safe the water is to drink. The watershed tour guide was immensely knowledgeable, and I became even more deeply aware of the tremendous gratitude and respect we owe to those who work around the clock to make sure that our water is safe. I gained an even greater understanding of the importance of ecology when learning about how the Department of Environmental Protection plants trees upstream from a river to help keep the water pure by filtering out toxins and impurities.

Despite the fact that high-quality water is delivered to NYC, I hear a lot of anecdotal concerns about water safety, at least in the Bronx. Legitimate concerns have been raised since water testing in NYC was examined more critically after the Flint water crisis. It turns out that the pipes bringing water into homes and schools are often old and made of lead, increasing the likelihood of lead leaching into our drinking water. Water samples from 2016-2017 found high levels of lead in some samples of NYC water delivered to schools, leading to outcries about the water’s safety. Even though the NYC Health Department affirms that no cases of lead poisoning have resulted from the high lead levels found in water, any level of lead that makes its way into our bodies is too much. We can reduce the likelihood of lead leaching into our water supply at the individual level by letting the water run before drinking it, only drinking water that comes out of the tap cold (since lead dissolves in hot water), or using special filters that remove lead.

Ideally, we could have well-funded public education campaigns about how to drink water safely, and to replace old pipes with non-lead pipes. But in order to get government and funders to prioritize water safety and public health, we need to tap into our internal spiritual wells, which drive us to improve the quality of life for all, and build increased momentum for the needed changes through advocacy and organizing.

A loose coalition of organizations in the New York City area partner to ensure a safe water supply and to encourage water consumption. Food & Water Watch has policy campaigns to improve pipe infrastructure. The New York City Health Department and Bronx Health REACH have campaigns to encourage water consumption and educate people about the health risks of sugar-sweetened beverages. Water2Kids is a business started by twin children in the Bronx (with the support of their mother) who wanted to see water — instead of sugar-sweetened beverages — marketed to their age group. Groups like Religious Organizations Along the River (ROAR), the Metro New York Catholic Climate Movement (a chapter of the Global Catholic Climate Movement), and the Center for Earth Ethics of Union Theological Seminary work to protect the New York water supply from projects that could threaten the safety of our water. Churches, including Franciscan and other Catholic parishes in NYC, organize film screenings about water and other environmental issues.

As interdependent creatures, human beings must rely on one another and our ecosystems in order to access the most basic of necessities required to sustain life on Earth. Because of our reliance on our watershed and other natural resources, ensuring our water sources remain uncontaminated is vitally essential and part of the call for us to steward creation. As we are interdependent with the Earth to meet our physical human needs, so the parts of the body of Christ are also interdependent with one another. We all need one another in order to make the impacts we want to make.

It can often feel overwhelming to try and address all of the overlapping and interconnected issues related to ensuring safe and healthy water and food supplies. However, as Wendell Berry says in the documentary Look and See: A Portrait of Wendell Berry, we must work on putting the pieces together one at a time, rather than all at once — such as starting with our own watershed. By taking bite-sized steps to address our ecological crisis while continuing to recognize the interconnectedness of issues and our interdependence with the local ecosystem, we can put faith in action by creating a livable, sustainable future for current and future generations. 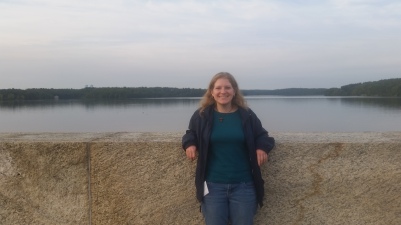 Bio: Kelly Moltzen is on the board of the Franciscan Action Network and founded the Food & Spirituality Committee of the Academy of Nutrition & Dietetics’ Hunger and Environmental Nutrition Dietetic Practice Group, which she currently chairs. As Program Manager for the Creating Healthy Schools & Communities program for the Bronx Health REACH initiative of the Institute for Family Health, Moltzen provides leadership and guidance in the development and implementation of evidence-based policies, place-based strategies, and promising practices to increase demand for and access to healthy, affordable foods and opportunities for daily physical activity while also reducing health disparities. She works with a broad array of stakeholders and serves as principal liaison to the New York State Department of Health. In addition, she co-chairs Bronx Health REACH’s Nutrition and Fitness Workgroup and The Bronx Healthy Beverage Zone initiative, and assists in the development and evaluation of nutrition-related programs. Moltzen’s spiritual path has led her to a deep commitment to addressing food justice issues from a faith-rooted perspective.

One thought on “Water and Health in the Bronx: Protecting the Sacred”