“We are doing this discipleship; we are disciples of this watershed!”

A woman named Beatriz Fernández de Hütt exclaimed the above quote during her presentation at a workshop on the Spanish translation of the watershed discipleship book. She leads a group called Amigos del Rio Torres that works to clean up the river running through San Jose, Costa Rica.

She learned about watershed discipleship at a recent workshop at the Universidad Bíblica Latinoamericana (UBL) in Costa Rica, where Josh and Grecia Lopez-Reyes represented Bartimaeus Cooperative Ministries (BCM) and presented on watershed discipleship, sharing from Discipulado de la Cuenca about the connections between watershed care, Christian faith, and the social and environmental justice concerns facing humanity and our planet today. This event celebrated the collaboration between UBL and BCM to brin 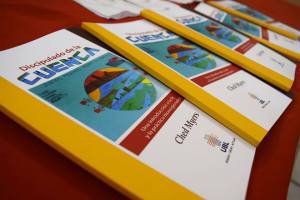 g the Spanish translation to print. When I spoke to Grecia and Josh about their trip, they expressed inspiration from the fact that many of the people they met in this workshop were already doing activist and advocacy work in their watersheds and were Christians, but had not necessarily connected their environmental work with their faith.

Josh and Grecia Lopez-Reyes live near Los Angeles, CA, and met while pursuing a Master of Arts in Transformational Leadership from Azusa Pacific University. While engaging in field-based education around social justice issues such as land rights, community economics, education, and other justice issues in Brazil and India, respectively, the two became increasingly aware of environmental concerns compounding other areas of social injustice. They learned about the work of Ched Myers and Elaine Enns while in school, including watershed discipleship, restorative justice, Sabbath economics, and micro-community economics, and sought out a chance to attend one of the Bartimaeus Institutes.

The opportunity came up for a presentation on watershed discipleship in Costa Rica to coincide with the release of the new primer in Spanish, Discipulado de la Cuenca, and Grecia and Josh were able to make the trip. Though they came to present, they also learned a great deal. As Josh put it:

The trip was like a catechism: being in a place that has protected nearly 27% of their natural environment, seeing the wildlife, seeing people who have taken care of and are struggling to take care of their watershed.

It’s challenging to us in a North American context, knowing we’re in this watershed moment, that we have to become people who know the stories, the trauma, the pain. It challenges us to really live our Christian watershed discipleship.

In addition to the activists from Amigos del Rio Torres, Josh and Grecia connected with students and faculty at the Universidad Bíblica Latinoamericana. It is a Protestant university in San Jose, Costa Rica, and students come there from all over Latin America to receive undergraduate or master’s level training for ministry, and continuing education while already engaged in ministry. The Lopez-Reyeses met students and faculty from nations such as Peru, Brazil, Chile, and Cuba. Following the presentation of key concepts from Discipulado de la Cuenca and practical examples from local groups working in their watersheds, a rich conversation unfolded around the intersection of Christian faith, the environment, and social justice. Karla Koll, who teaches at the Universidad Bíblica Latinoamericana, hopes this event and the translation project are the tip of the iceberg in moving UBL toward a greater focus on the theology and practice of creation care. Josh and Grecia were also able to visit an intentional community in San Jose called Casa Adobe, which hosts a community garden as an expression of being good neighbors.

Unfortunately, one group that planned to attend the workshop, La Asociación del Acueducto Rural de Milano, could not make it due to the hurricanes. Grecia and Josh were disappointed not to make a connection with this group, which is doing the work of watershed discipleship (though perhaps not yet using the term) in a rural community in Limon, Costa Rica. The group not being able to attend due to a storm intensified by climate change brought home the reality of the importance of watershed discipleship. Josh found himself thinking:

Seeing that made me realize, it’s all connected: whether it’s creation, or issues of people who are vulnerable in our community, or what we’re experiencing with all these hurricanes — there are repercussions of our actions. If we as people of faith don’t change our actions, we’re not going to be able to help people be disciples.

In the future, Grecia and Josh hope to take a trip to Honduras to meet and learn from the courageous environmental activists and community organizers about living the active part of watershed discipleship more fully. Grecia felt inspired by the work of those they met and heard about while in Costa Rica who are already seeing the impact of climate change and environmental degradation on their home places, comparing their level of commitment to her habits as a citizen of the United States:

In many ways we’re so disconnected from our land, and the environmental struggles going on in our watershed. So, it’s exciting to be part of this, to see the communities that are already doing the work of caring for their watersheds, but haven’t necessarily thought about it as a faith thing.

We were inspired, too, because not living in a place like Honduras where the environmental struggles are so in-your-face all the time, we can ignore it. There was an environmental activist in Honduras, Bertha Caceres, who was killed because of her activism around environmental justice. When it’s your place you’re trying to save, you’re willing to put your body on the line for it. That’s made an impact on me for understanding the importance of this work, and made me want to become a bigger part of this movement.

As watershed discipleship spreads to Latin America, those of us in the United States will have a lot to learn from the activism and community organizing that is already occurring out of necessity in countries across our southern border. Hopefully we’ll be up to the challenge of not only sharing our theological understandings, but also being open and humble, as Josh and Grecia are modeling, to learn from the good work that is already underway.