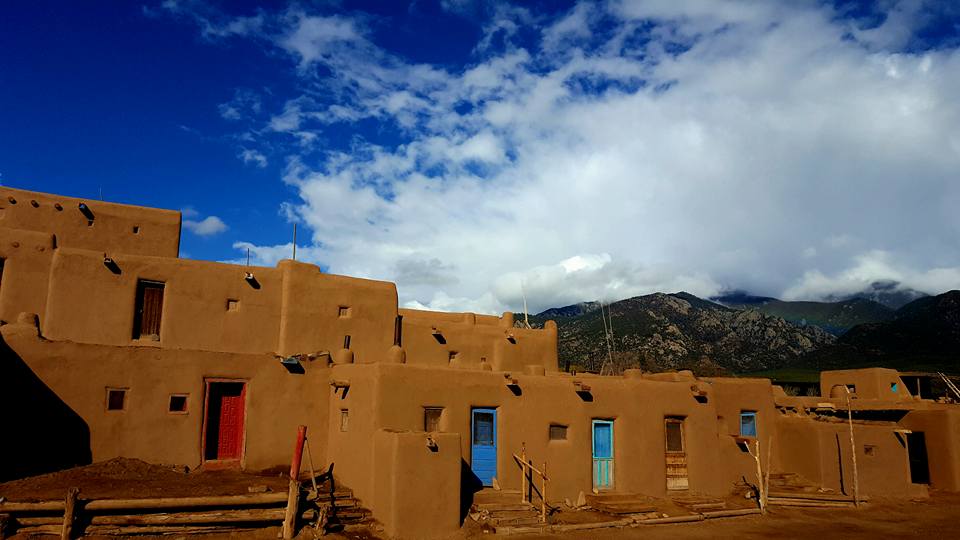 Imagine the U.S. government confiscating your beautiful local church building and grounds and turning its worship space into a public park. Imagine dune buggies and picnickers and diesel engines and fast-food wrappers. Imagine the sanctuary Sunday morning trashed, a victim of the party the night before.

Unimaginable? You bet. But that’s essentially what happened to Taos Pueblo in 1906, when earnest President Teddy Roosevelt violated the U.S. Constitution. Without consulting the Taos Pueblo community, he declared their Blue Lake to be part of Carson National Forest. 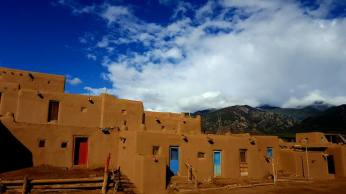 What’s wrong with placing sacred land in a national forest? If you’re a Christian environmentalist like me, protecting large swaths of God’s beautiful forests from human meddling seems like a great plan. Roosevelt’s governmental act of protection and conservation was well intentioned—he created a federal fix to address threats of corporate mining and exploitation–but it also was paternalistic and generalized. It ripped specific rights from a specific people, and a specific people from their specific sacred place. It’s taken me a long time to learn that place-based indigenous people like the natives of Taos aren’t dependent upon all forests in general, and connected to just any lake—they are inextricably linked to their lake, in their mountains, above their specific adobe homes. Taos native Sonya Bernal told me that, for indigenous people, their link to their home place is akin to an umbilical cord.

In Taos Pueblo history, Blue Lake is the tribe’s place of origin—from the lake’s depths Taos Indians entered this world. Blue Lake is their most sacred place, where they return after death and enter eternal life. It’s their Mecca, their church, their garden of Eden, their heaven. Severino Martinez, a former governor of Taos Pueblo, once tried to explain the lake’s significance to non-Indigenous politicians: “Blue Lake is the most important of all shrines because it is part of our life, it is our Indian church…. We go there and talk to the Great Spirit in our own language and talk to nature and…God Almighty, like anyone else would do.”

So when Roosevelt ripped ownership of Blue Lake from their hands in 1906, Taos Pueblo reeled. As Joe Sando writes, “a major taproot of their culture had been cut.” Sando explains the Pueblo began a massive struggle to win back what was theirs: “They spent many years learning how to battle politicians and bureaucrats on their own terms in order to redress the wrong done them. For sixty-four years, the Taos people would fight against impossible odds to regain their hallowed site.”

Finally, in 1970, after sixty years’ struggle, Taos Pueblo regained Blue Lake. President Richard Nixon commented, “I consider [returning Blue Lake] one of the most significant achievements of my Administration. It is more than just a land settlement: it is a symbolic turning point in the history of those who were the first Americans.”

And To Your Land You Shall Be Married

The United States government will judge your case to be valid,
and all corporations shall acknowledge your rights.

Your eternal place-bond shall be a crown of beauty in the Lord’s hand,
and a royal diadem in the hand of your God.

After Nixon’s decree, no longer shall they call you Divorced from Your Land,
or name your sacred lake Open to the Public and For Sale;
but you shall be called Our Delight Is in Our Lake,
and to Blue Lake country you shall be bonded;
for the Lord delights in you, Taos Pueblo,
and to your land you shall be married.

And to your land you shall be married. What would it mean to be married to your land—to be that rooted to place? As Mountain States’ Mennonite minister for watershed discipleship, I’m fascinated by this question. Jerry Kimmel first raised this question for me in early 2016 in his sermon, “Married to the Land.” It got me thinking: what would need to change in me to be truly married to my place?

To be married to our places goes against every core value of our dis-placed, massively-mobile, uber-disposable consumer culture that tells me everything is for sale and we should simply move when the river gets polluted or the neighborhood becomes tired. But place-based people understand what it means to be married to the land. Look at this 1970 proclamation by young adults of Taos Pueblo in the struggle to reclaim Blue Lake:

We, the young people of the Taos Pueblo Tribe…have heard and read baseless and false criticism thrown at our people by opponents, some whom even question our aboriginal right to this land; some whom even dare say all Indians are inept in the field of conservation. We remind those who say that of the virgin condition of the land occupied by Indians…before foreign influence. Many of our opponents have no other interest in the land except for once a year recreation, and the money to be made from it through activities that are harmful to the land.

Our tribal leaders have been criticized that their tribe and traditional way of life is deteriorating, that their young people are not interested in the traditional way of life. Let these people who voice these opinions look and listen: …We want our generation to have the right and the environment to carry on the Indian way of life. Our way of life is centered around this homeland which was founded by our forefathers and we do not want to lose it for the sake of monetary, recreational and plain land-grabbing interests of our opponents.

The Forest Service is contemplating their multiple use policy for our homeland. This includes harvesting of timber, development for recreational purposes, and manipulation of plant life. This is wrong for a land which must remain as it was created…. Nature took care of itself through these thousands of years and can take care of itself if man respects it and does not manipulate it to suit his needs. Our Taos Indian people have long believed that man should live in harmony with nature. Man should adapt himself to nature rather than forcing nature to adapt to man. Many people across this nation are just now becoming aware of the importance of this way of thinking…. We are not demanding land which is not ours. We are pleading for a land which our people have known as theirs since time immemorial. (Front page, Taos News, July 19, 1970)

Almost 50 years ago, Taos Pueblo’s successful quest to reclaim Blue Lake struck a nerve across the nation. Yes, it was about a specific place, but it was about all place-based people, in all places under threat. “Taos Pueblo’s struggle to regain its holy place is one of America’s epic stories,” Joe Sando observes. “The sixty-four-year effort became a symbol of the plight of the American Indian. Before it ended, it…gained the support of most American Indian tribes as well as of people all over the world who recognized in this confrontation an example for aboriginal people wherever their claims.” As President Nixon stated when signing the bill into law: “It is more than just a land settlement: it is a symbolic turning point in the history of those who were the first Americans.

Standing Rock: Coming Together To Protect Our Waters 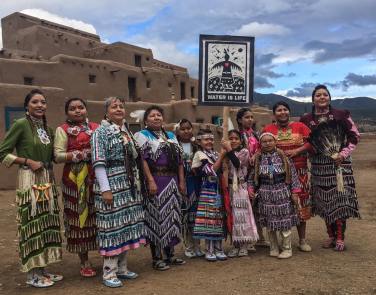 Today, we are at another powerful turning point for first Americans, and for all of us. The courageous actions of the Standing Rock Sioux inspired place-based people everywhere. Through the example of Standing Rock, many of us are coming to a powerful realization: protecting our watersheds for future generations is God’s call to action for people of faith today, just as urgent as it was for previous generations to abolish slavery or march for civil rights.

Yes, the actions happening at Standing Rock are about that specific tribe, rooted in that specific place. But what the Standing Rock Sioux are doing is much bigger. Gracey Claymore, a 19-year-old youth representative of the Standing Rock Sioux, recently spoke before a panel of about two dozen United States lawmakers. She explained how her tribe knows that they are acting in defense of not only their home place, but in defense of all humanity: “We are…coming together to protect our waters,” she said. “It’s not just the Dakota Access issue. It’s so much bigger than that. We have been saying over and over that this is not just a Native American issue; this is a human race issue. We are doing this to protect our human race, because without water we cannot survive. Without this Earth, we will not be here any more.”

Bringing it Back Home

In Taos, almost fifty years after the Blue Lake victory, our community’s water is at risk again today. A new compact called the Abeyta Settlement is a confusing snarl of competing water claims. Water rights are on the auction block, and Taos residents—indigenous and settlers alike–are mixed about what to do. What is going to be best for our Taos community?

Taking a cue from Taos’ current controversy, modern Americans who say they care for creation might ask: At what price are we selling our waters? What short-term gain of piped petroleum is worth risking healthy water for our future generations? Like the rest of humanity swept up in consumer culture, many of today’s affluent Americans seem to lack a sense of being married to place.

Looking at my own life, I know I embrace far too easily the latest gadgets and comforts, even when these very comforts destroy our ecosystems. It’s time for me to step up, root down, and wake up as a creature dependent upon my watershed of the Rio Grande. It’s time for all of us to take a long look at Isaiah’s words, and practice being married to the land in which we move and breathe and have our being. Like the Standing Rock Sioux, we need to answer with our bodies: what is being endangered in our home places? What is worth protecting with our very lives? Our children’s children deserve nothing less. 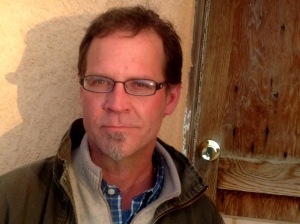 Todd Wynward is an author, educator, small-scale farmer, wilderness trip leader, and Mennonite minister for watershed discipleship affiliated with Mountain States Conference. He and his wife, Peg, founded a wilderness-based public charter school in 2001 and are now creating TiLT, an incubator for intentional living in Taos, N.M. His recent book, Rewilding the Way: Break Free to Follow an Untamed God, was published by Herald Press.